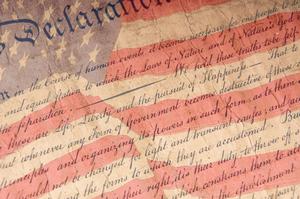 This weekend as we celebrate our nation’s founding, I feel moved to write a few words about our Academy, its founding, and its mission.

On this day, July 3, 1776, 244 years ago, John Adams wrote a letter to his beloved wife Abigail Adams recounting the vote on July 2, 1776 of the continental congress to approve the Declaration of Independence which was then signed on July 4. In that July 3rd letter to Abigail, John Adams stated about the declaration of independence:

I am apt to believe that it will be celebrated, by succeeding Generations, as the great anniversary Festival. It ought to be commemorated, as the Day of Deliverance by solemn Acts of Devotion to God Almighty. It ought to be solemnized with Pomp and Parade, with Shews, Games, Sports, Guns, Bells, Bonfires and Illuminations from one End of this Continent to the other from this Time forward forever more.

You will think me transported with Enthusiasm but I am not. -- I am well aware of the Toil and Blood and Treasure, that it will cost Us to maintain this Declaration, and support and defend these States. -- Yet through all the Gloom I can see the Rays of ravishing Light and Glory. I can see that the End is more than worth all the Means. And that Posterity will tryumph in that Days Transaction, even altho We should rue it, which I trust in God We shall not. https://www.masshist.org/digitaladams/archive/doc?id=L17760703jasecond

The cause of liberty in 1776 started in the hearts and minds of our founding generation, and it found a crescendo on July 4, 1776, loud enough for the world to hear. John Adams reflected in a letter dated 8-24-15 to Jefferson. “As to the history of the Revolution, my Ideas may be peculiar, perhaps Singular. What do We mean by the Revolution? The War? That was no part of the Revolution. It was only an Effect and Consequence of it. The Revolution was in the Minds of the People, and this was effected, from 1760 to 1775, in the course of fifteen Years before a drop of blood was drawn at Lexington.?” https://founders.archives.gov/documents/Jefferson/03-08-02-0560 The cause of liberty today will be won in the same manner—first in the hearts and minds of each new generation. That cause is uniquely an effort of sound liberty-based education. The founding generation, a fiercely independent group of people, read great books (see McCullough quote below).

The founders of our Academy, Dean and Linda Forman, had a dream just over 10 years ago to develop an academy fit for our nation’s founding that would develop a generation of servant leaders who would defend our nations heritage of life, liberty, and the pursuit of happiness in much the same way the founding generation was developed through a traditional of engaging in great books. As they worked to develop the vision for our Academy, they gathered together a small group of like-minded people to develop our mission. Out of those meetings came this beautiful mission and vision statement:

John Adams Academy is restoring America's heritage by developing servant leaders who are keepers and defenders of the principles of freedom for which our Founding Fathers pledged their lives, fortunes, and sacred honor.

Since that time, there has been untold sacrifice and toil to bring this Academy to where it is today. Volunteer board members, volunteer parents and scholars, staff members, teachers, administrators, campus supervisors, facilities staff, support services staff etc., have spent countless hours building this Academy from just an idea to a movement that has amassed over 3000 scholars on 3 campuses this fall.

Revolutionary war and freedom “in the minds of the people” continues rolling on. It has never ended. Our nation has fought many wars in the liberation of men and women. We too will face more challenges in the advancement of our mission.

When I was in law school in 2005, David McCullough--a two time Pulitzer prize winner, author of 1776 and John Adams and recipient of the Presidential Medal of Freedom—gave a speech on my campus titled, “The Glorious Cause of America”. I personally invite you all to listen to that 45-minute speech this Independence Day with your family (click the link here). In that speech, Mr. McCullough lauded the education of our founding generation: “It was the Age of Enlightenment, an era when it was widely understood that if you wanted to know something, a good way to learn was to read books—a very radical idea to many in our day and age.”

But, he made a more important point about our founding generation that I believe resounds with our mission and vision for the academy today. He said: “We are taught to honor and celebrate those great men who wrote and voted for the Declaration of Independence in Philadelphia. But none of what they committed themselves to … none of that would have been worth any more than the paper it was written on had it not been for those who were fighting to make it happen.” In like manner, our mission and vision statement, our charter, and all our founding documents are no greater than the paper they are written on without the enduring dedication of each and every one of you. I have attached a mission and vision statement for our Academy below. I hope we can rededicate ourselves today to our common cause of liberty.

As our posterity looks back on the founding day of this Academy, may they too “triumph in that Days Transaction”. May our Academy and its American Classical Leadership Educational model always be a great force liberty. That is my hope.

The vision and mission of John Adams Academies Inc. (the Academy) is to, “restore America’s heritage by developing servant-leaders who are keepers and defenders of the principles of freedom for which our Founding Fathers pledged their lives, fortunes, and sacred honor.” All systems, programs, and services of the Academy are designed to achieve the mission of developing servant leaders. The

following statement provides additional definitions and details that further articulate the intent of the mission statement:

What is America’s Heritage?

America’s heritage is a tradition of a free society of self-governing citizens united in the common cause of —life, liberty, and the pursuit of happiness for all. Such a free society is necessary for true human flourishing.

Liberty: This free society is grounded in the principles of liberty and freedom embodied in the Declaration of Independence, the Constitution of the United States, and the Bill of Rights. These principles include:

• justice under the law for all people

• individuals are endowed by their Creator with inalienable rights

Self-governing Citizens: America’s Heritage is a tradition of responsible, liberally educated citizens exercising their free will to improve and govern themselves according to natural laws. Self-governing citizens embody the ideals of self-sufficiency and virtue. Liberally educated citizens are able to read deeply, think for themselves, communicate ideas to others, and are well-versed in the great ideas that have shaped Western Civilization in all major disciplines from mathematics to the arts.

Society: America’s heritage is a tradition of communities of such self-governing citizens, each with their own unique gifts, voluntarily acting for the benefit of their community and for the preservation of free society by leading as servants in all levels of that society. Morality based on natural law is an indispensable support to prosperity in a free society. In other words, for such a free society to thrive under a government of, by, and for the people, the consenting governed must be informed, liberally educated, embrace the principles of liberty, serve in their community, and participate in the process of governance. Free societies also adhere to a tradition of progress in those communities rooted in property rights, entrepreneurship, and the freedom of voluntary exchange in free markets.

In sum, the tradition of a free society is only sustainable with a citizenry of serving, self-governing citizens, who lead out to improve themselves, their families, and their communities.

What is a Servant Leader

A servant leader is a self-governing citizen who has wisdom and virtue to do that which is true and correct. Servant Leadership is cultivating, propagating, and defending life, liberty, and the pursuit of happiness for self and others. The following characteristics are indicative of servant leadership:

A servant leader serves first, driven by an inner compass of virtues and core values, with a natural desire to serve and empower others. This is not about being subservient but about sincerely wanting to help others by asking “what is needed of me?” A servant leader understands that life is not a quest for pleasure or power but of meaning. A servant leader has the vision to see what is and what could be and uses his or her gifts to bring about that ideal. The servant leader intentionally chooses to serve, putting the needs of others first and helping them achieve their potential.

A servant leader has vision.

A servant leader has competence to lead--the ability to build coalitions and inspire others to follow as first among equals.

How do we Restore America’s Heritage?

In the Individual: Each generation of new scholars, parents, teachers, staff, and leaders comes to us without a full understanding of a free society and servant leadership. The understanding of a free society and servant leadership through liberal education needs discovery and restoration in each individual. Also, the restoration of America’s heritage is a journey, not a destination—each individual needs to continue to grow and improve. It is a lifelong effort to restore the principles of America’s heritage in one’s heart, mind, and actions.

In the Education System:

Education has strayed far from the academic results that our founding fathers achieved—an education that prepared them to become model servant leaders to establish the greatest free society in the history of the world. In fact, most teachers, parents, and scholars come to us without an understanding of the system of education that produced such servant leaders. We seek to restore, develop, improve, and implement a system of education rooted in the same principles of liberty and freedom that embody America’s heritage, thereby imparting a full understanding of a free society and developing self-governing servant leaders. By combining a classical content and liberty-based pedagogy with our 10 Core Values, we provide the John Adams Academy American Classical Education. By doing so, we provide an education rooted in the same tradition in which the founding fathers were educated—an

education that cultivates the scholars in the 10 Core Values and foundational principles discovered through the classics and guided application of those principles.

In Society: History has shown that a free society is constantly under attack and must be restored each generation. It is perpetuated only by constant restoration. Servant leaders from John Adams Academy go forth to fulfill their unique roles in the grand tradition of a free society, restoring it, preserving it, making it greater, and helping it in all levels of society (individual, family, school, church, city, county state, nation, work, market place, etc.). In this manner, we develop servant leaders who become keepers and defenders of the principles of freedom throughout society and by doing so restore America’s heritage.

How do we Develop Servant Leaders?

Developing a servant leader is about becoming, not about teaching a certain set of facts or training in a particular skill. We recognize each scholar as a sovereign and an individual agent that is best developed, not through dictate, but through a process rooted in the principles of freedom, whereby individuals are inspired to take responsibility for their education; to grow from nurtured to self-governing, responsible, and virtuous; and to progress from self-improvement to selfless service.

This growth process is accomplished through our 10 Core Values combined with classical pedagogy and classical content rooted in the principles of liberty.